I am pleased to report success in my attempt to make a good final print from Kodak’s BW400CN chromogenic film. Note I said “final” and not “fine”; quite aside from the fact that I’m nowhere near experienced enough at this to claim anything I produce is a “fine print”, there can be no mistaking this for a fine print. But it’s a decent print, more than adequate for the purpose I have in mind. 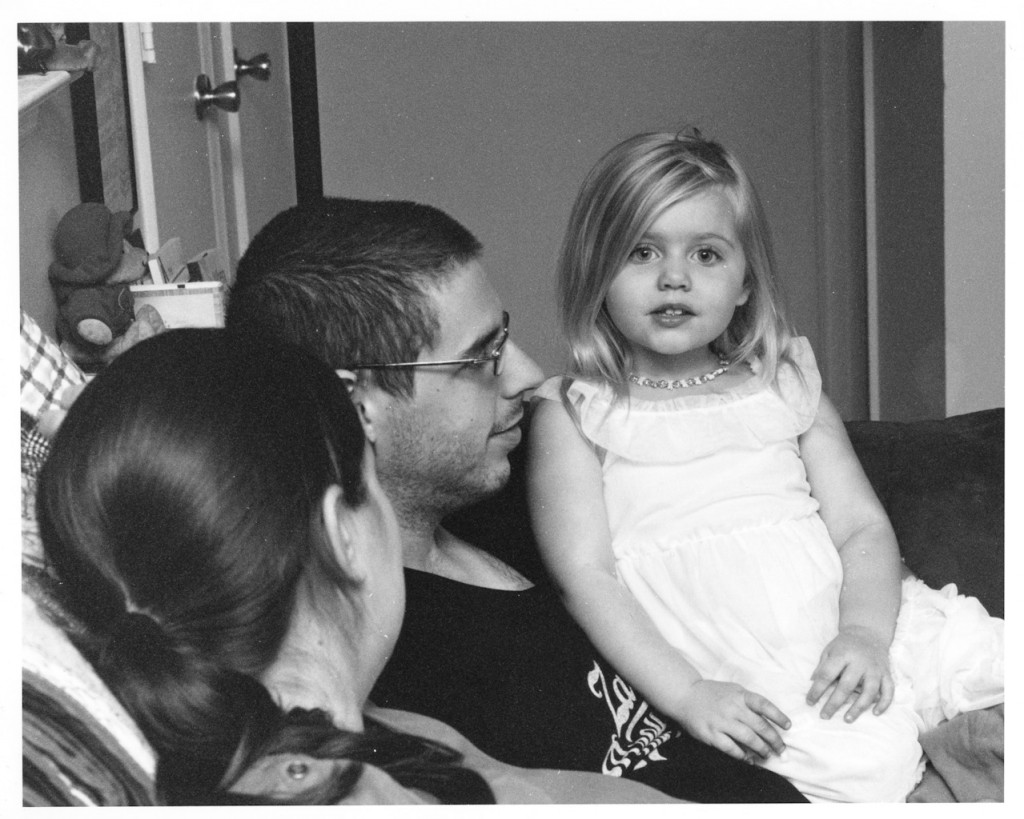 One of the three final prints I made. You’ll notice it needs spotting; the negative has a whole lot more crud on it than my regular B&W do, and the magnification level needed for this crop really didn’t help. That’s an easy fix, if somewhat time consuming.

I ran a quick test giving it 15 seconds of exposure instead of 14. That’s not a very big increase, but it did make a subtle improvement to the detail on the white dress. It had no noticeable effect on the shadows and an almost imperceptible darkening of the midtones. That’s close enough to what I wanted, so that’s the time I exposed the three final prints for.

When I do multiple prints, I’ll expose them all one after the other, storing the exposed paper in a left over lightproof bag from a used package of paper just to ensure they don’t accidentally get fogged. Then I run them sequentially through the trays.

In this case, the sequence was:

Leaving print 1 in the fixer, I start on print 2: again, 1 minute dev and 30 seconds stop. At this point, I move the first print out of the fixer (it’s been there 3 minutes by now) and into the water soak tray. Print 2 goes in the fixer for a minute and a half, and then I repeat the sequence with print number 3.

Once print 2 has joined 1 in the water tray, print 3 goes in the fix bath for 3 minutes, matching the first two. It then joins them in the soak tray.

At this point, I quickly return chemicals from the dev, stop and fix trays to their bottles and rinse out those 3 trays. I’ll be using them to wash the prints.

Washing is done with a print per tray, fill tray 1, then 2, then 3. Dump tray 1 and refill, do the same for #2 and #3. Repeat the sequence for 6 cycles of fill and dump, then hang the prints to dry. It sounds much worse than it is.

I am very happy with the result, though the prints do need spotting. My C41 is never, ever as clean as my traditional B&W negatives and there was a lot of magnification, so much so that were I to have printed the full frame instead of cropping, it would have needed 16×20 paper to fit. I’m impressed by the sharpness and grain considering that it’s 400 ISO film and was underexposed a stop or more to boot. The magnification does mean that any dirt or dust is that much more obvious, too. I’ll be examining how to deal with that problem in a near future post.

I’m not going to pass final judgement until I try a less-magnified enlargement from a properly exposed BW400CN negative, but on the strength of this result, I’ll certainly be taking that step at some point with some existing negatives which are worth a “fine” print.

That said, I wouldn’t ever choose to shoot BW400CN with the intent of enlarging it optically. This is by far the most grungy negative I’ve had to deal with, even though it was processed exceptionally well by a reputable pro lab; it’s the first print I’ve made where I knew I would have no choice but to spot every single print. Oh, joy. Gotta learn that skill, though, so now is as good a time as any. Also, it is a peerless pain in the ass to focus. Granted, the focus rails on my 23CII are in need of some TLC and could be smoother in operation, but this was orders of magnitude harder to properly focus than even the fine grain of Acros or Pan F+. It just doesn’t snap into focus the way traditional silver grains do.

There are just too many “gotchas” involved here to make it worth doing as a matter of routine.