“The negative is comparable to the composer’s score and the print to its performance. Each performance differs in subtle ways.” – Ansel Adams.

I feel that this is something we are missing out on with digital and hybrid film-digital means of print. Yes, we’ve gained convenience; I can scan a negative, dust spot it, crop it, remove any distracting elements, set contrast and tonal range, save it out as a high-res file and make any number of copies, all exactly alike. Very handy.

But it’s that “all exactly alike” thing that bothers me. I feel less like someone engaging in a feat of craftsmanship and more like someone feeding parameters into a mass-production machine. Each performance is identical, like listening to a recording on CD rather than seeing the music performed live. The experience is still enjoyable, but the viewer, or listener, is at least one step removed from the humanity of the artist.

Worse, perhaps, is that once the final file is made, I’m unlikely to revisit it again later. It’s set in stone, figuratively speaking. And yet, my own aesthetic isn’t necessarily fixed, a phenomenon I just experienced first-hand.

Kelli and I recently shared a table with a friend at the Saturday morning Vinton (Virginia) Farmers’ Market; I brought some framed photos I had already available, Kelli brought her cards and crafts and a friend soldÂ handmadeÂ candy and jewelry. It was enough of a success with Kelli’s cards that we plan to be somewhat regular attendees and while I don’t anticipate making lots of print sales, it’s an additional venue for my artistic efforts. Getting ready to prepare some new prints I had occasion to re-scan and re-process a negative I exposed and first published online late in 2011. I don’t have full-size scans of many of my earlier photos, as I was low on hard drive space and figured I could just make final scans as I needed to later.

Curiosity got the better of me and I compared my June 2013 rendering of “Shadow Walkers” with the December 2011 version on Flickr. 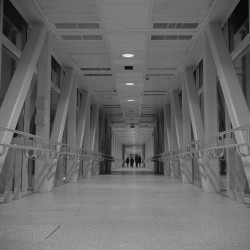 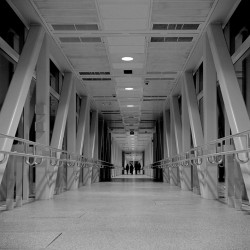 On the left, the old version, on the right, the new rendition (click the thumbnails for larger versions). The most obvious difference is the tonality; the new version has more contrast, with shadow areas dropping into solid black and specular highlights on the roof supports being brighter. Somewhere in the last 18 months I’ve realized that fear of blocked shadows is irrational; if the image demands dark shadows, then full speed ahead and never mind the histogram! I also figured the overhead lights could blow out to white without detracting from the image; they are, after all, very bright spots in real life. The moody intent remains intact, and maybe even enhanced by the contrast boost.

Other changes are more subtle. The newer version has a small amount of perspective correction to make the verticals truly vertical, though the overall crop is about the same. Also, a distracting bright light of some sort below the left-side handrail in the old version has been cloned out in the newer one. A small local contrast boost has been applied and there are probably some differences in the sharpening.

With a handmade silver gelatin print, there would be small differences in every print. Every one would be a hand-crafted individual item, subtly different to its siblings. As my artistic expression evolves, so will the exact rendering of this image. The art buyer gets something which was created, in effect, just for them; not last year’s artistic expression churned out onto paper by the push of a button. Going back to Ansel Adams, his prints of the same negative would change over the course of his career. It seems fitting to give him the final word here:

“The more recent prints are less timid. The early ones are softer, some think more subtle. I have a sharply different vision now. The results are, perhaps, more dramatic. Itâ€™s a growth in vision orâ€“who knows?â€“maybe a regression. [Chuckles] Anyway, it is different, just as a concert artist performs the same piece differently over the years. Quite a number of years ago, I heard the New York Chamber Music Society orchestra play a Haydn piano concerto with Rudolf Serkin as soloist. The last movement was particularly marvelous, and everyone was ecstatic. The entire orchestra was called back and the last movement was repeated. Serkin played it differently; he added a little magic to his interpretation, and the audience went bonkers. The orchestra came back for a second encore, and Serkin played the last movement again. And he gave it another twist. The rhythm was the same, the notes, the phrasingâ€“just certain subtleties, a little emphasis here and there. Three subtle variations in one evening! It was wonderful. Such variations are the artistâ€™s privilege. If my newer prints appear more bold and dramatic, it is because I became more confident and I was better at getting what I wanted.” – Ansel Adams, interviewed for the March 1983 issue of Playboy Magazine.

The full interview can be found onÂ David Sheff‘s website and is an excellent read.