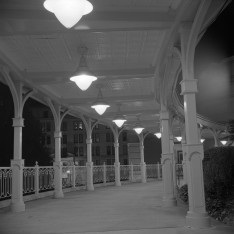 My first two rolls of Ilford‘s HP5+ film have been shot and developed.

The film was shot at box speed (400) metered using the ever reliable Gossen Luna Pro F. I developed in Rodinal 1+50 dilution for 11 minutes at 68F. This is the official time recommended by Ilford and also listed in the Massive Dev Chart.

First of all, I’m pretty certain that the development time was too short. Almost all of the negatives came out quite thin. I know my metering was correct, especially so for the incident metered shots which were very consistent in their difference from what I consider normal. I’m reasonably sure that the Yashica’s shutter speeds are in spec, or certainly not out by a stop or more. I haven’t had any trouble with previous rolls of Tri-X, Acros and Ektar run through it. I used all the shutter speeds throughout the roll and counted out some exposures in the 2-4 second range with the shutter set to bulb. Just can’t see all the speeds suddenly being out of whack by the same amount and my counting to be off by the same amount.

Also the edge markings on the film seem to be rather thin-looking.

So next roll I develop I’ll try something else. Possibly 13 minutes with normal agitation (30 seconds at start, 3 inversions every minute).

I also got a reasonable answer on my “which reciprocity adjustments to use” question: the Ilford official adjustments resulted in an overly dense negative, even with everything else on the roll looking thin. The shorter time garnered from testing yielded a negative with tones a lot closer to the other shots on the two rolls. I’m going to stick with those times and throw the datasheet’s recommendations under the bus.

I did notice that the lights in my night shots seem to be very dense despite the underdevelopment. Perhaps this film would respond well to a reduced agitation approach. Perhaps I’m used to Fuji Acros 100’s ridiculous ability to hold onto highlights.

What else? I like what I see so far in terms of detail and grain (supposedly Rodinal and HP5+ are not a match made in heaven, but I’m not seeing any big problem. Then again I’m not pathologically averse to grain either). I’ll be picking up another few rolls of this and refining my development. 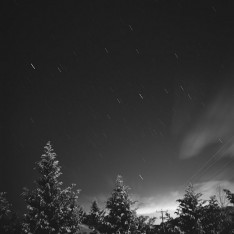 Up to now I’ve been shooting a lot of Fuji Acros 100 and the Freestyle “white label” version of the same (Legacy Pro 100). I haven’t really had to think very hard about the issue of reciprocity failure as a result.

Reciprocity failure is where the normal relationship of 1 stop of shutter speed being reciprocated by one stop of aperture in the opposite direction breaks down, and where an extra stop of exposure requires significantly more than double the exposure time. All films suffer it to some degree. Digital capture remains linear for any exposure time, but the trade-off is often increased noise.

With Acros/LP100 that doesn’t happen until you hit exposure times of over two minutes, and to date I’ve yet to run into a situation where I needed any longer an exposure aside from one shot where I was aiming to capture star trails (and in that case reciprocity isn’t really a problem, it might even be helpful in keeping the exposure of the overall scene in check). It’s an excellent emulsion for night shooting, in any case.

I’ve been trying out some Ilford HP5+ lately though and earlier tonight was out in downtown Roanoke, freezing my arse off with the intent of getting some night shots of city lights while Kelli went to her writers’ group. I needed to check on when the dreaded reciprocity failure kicks in first, however.

Now, Ilford provide pretty good datasheets for their films, right there on their website. But it struck me as a little odd that all of their films have the exact same reciprocity curve. Yes, they say HP5+ (a traditional type emulsion) has the exact same characteristics as the Delta films (their modern core shell type emulsions, similar to Acros and the Kodak T-Max range). Something smelled a little rotten to me.

So I dug around a bit more and found this article, “Black-and-White Reciprocity Departure Revisited” by Howard Bond, who decided to thoroughly test some film emulsions and compare their reciprocity characteristics to the manufacturers’ claims.

Turns out the Ilford datasheets aren’t too accurate. Neither are the ones from Kodak. Anyway, with both official and tested times taped to the back of my trusty Gossen Luna Pro F, I set out on an hour-long wander around downtown, shooting 12 big square frames in the Yashica-A. Mostly I kept exposure times in the sub-4-second region, where the official and unofficial exposure adjustments were nearly identical. For 8 second metered exposures I split the difference somewhere in the teens.