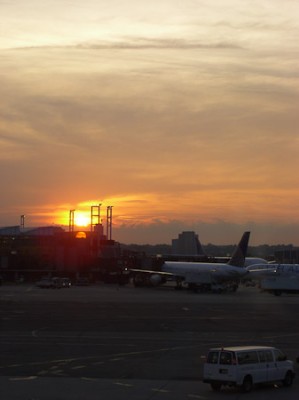 The sun sets over the gates at Newark's Liberty airport while waiting for the Belfast flight to board.

So, my brother getting married last weekend meant I had my first opportunity to travel by air with film since, well…about 1999 probably. Back then I knew no better, the film went through the x-ray scanners like all my other carry-ons and in truth I never had a problem.

But, Kodak recommend not x-raying if at all possible. What to do, especially in this era of intense security theater? What else might turn out to be a problem?

We traveled from Charlotte, via Newark, to Belfast, and back again several days later.

Arriving at Charlotte the TSA agents on duty were able to take my gallon ziplock of film (eight 35mm rolls in their plastic canisters) and perform a hand inspection. They were done before I’d picked up all my stuff from the other side of the x-ray scanner. Camera gear went through in the bag without a hitch. I left the camera unloaded.

Connecting at Newark, we didn’t have to leave the secured area at all (actually our departure gate was right across the walkway from our arrival gate, best transfer EVER). I loaded a roll of Ektar 100 and took a shot of the sunset, then another with the digital. Nobody freaked out about this, which was nice.

Things were a little less peachy on the return journey.

Again, had all the film in canisters in a ziplock bag. The camera and gear, no film loaded, went in the camera bag as before. The screener at Belfast International would not even consider a hand inspection: “the x-ray machine is film safe”; yeah mate, it bloody well better be. The camera bag, having been scanned, then had to be opened, its contents separated out, put in a tray, scanned again (along with the film, so now it’s been zapped twice, including the roll of Fuji Press 800 with wedding reception photos on it), then swabbed to make sure it wasn’t made of Semtex or something. Evidently it wasn’t, and I was left to my own devices to pack the bag as I saw fit.

Transiting through Newark, TSA again allowed a hand inspection of the film, but just like in Belfast, the camera gear had to go through again, separated out into a tray. OK, so how come this bag was OK in Charlotte but not Newark? I don’t object to the whole “separate it out into a tray” thing (much), but a little consistency would be kind of nice here so I know what’s expected of me. Maybe a more typical modern plastic-y camera would fare better than my heavy metal monster? Maybe the twelve AA batteries in the motor drive gave them a mild freakout? I’m sure it looks pretty imposing in an x-ray scanner.

Anyway, TSA in the United States are very accommodating when you want film inspected by hand. Indeed, I understand that they recommend you do it that way. No problems at all, quick and efficient, 10 out of 10. UK screeners, not so much, at least not at BFS. As far as they’re concerned, the machine is safe for film, end of story. My opinion? They could easily hand examine it, they just didn’t feel like being accommodating toward a customer, in typical British “rules are rules” fashion. That said, neither of the rolls I got developed this week had any apparent ill effects from the two trips through the x-ray system, even the ISO 800 stuff which had been exposed already.

I think I’d probably do the same thing again next time I make that journey, unless I had some really seriously fast or pushed film (1600 or faster), then I’d probably mail those rolls back home before going near a UK airport just to be safe.

Pinhole photography is something I think I’ve mentioned before, but here’s another cool DIY pinhole setup presented at Damn Cool Pics: how to make a pinhole camera from a matchbox. It uses 35mm film with a 24x24mm frame size. The film transport is especially clever, I think, using a piece of plastic to make a noise every time a sprocket hole passes – wind the film and count sprocket clicks to get to the next frame with some accuracy.

One of the great things about film is its archival qualities, especially traditional silver-based black and white film. How does developing some film exposed 31 years earlier and getting great results sound? Can you be sure that if, in 2041, you were to find an old SD card with a bunch of proprietary RAW files on it, you’d be able to even find something the card would fit into, let alone read the contents? It’s not like you can hold it up in front of a light source and just look at the photos, after all. Would the data even be intact after 31 years? For the record here, I’m an IT guy, I’ve been around computers since 1984 and have done the data obsolescence dance far too many times to ever use the words “archival” and “digital” together without the word “NOT” involved somewhere.

Cearta.ie has a good article debunking Ten Copyright Myths. They should make everyone read and understand this before they’re allowed to use the “Save Image As…” menu option in their web browser.

Via Reuters: “Nokia exec: phones to make system cameras obsolete“. I checked, it wasn’t posted on April 1st. Call me crazy, but I really can’t see this happening. On the other hand, if I ran a company which depended on sales of compact point and shoot digital cameras, I’d be looking at cellphones and the lower end of the mirrorless interchangeable lens segment with much fear and loathing right about now as their outflanking maneuver unfolded around me.

The Discerning Photographer has an article up explaining why it’s important to do at least some of your own printing. I’m in agreement here: sure, it’s convenient to be able to present work online, but a printed photo just has something about it which viewing on a screen lacks.