I don’t often go for the toy camera aesthetic and I have a beef with those who portray film as being random, fuzzy and unpredictable because they think film photography and toy camera photography are one and the same.

But in the right hands, a toy camera can produce beauty. I’m not those hands, but sometimes it can be fun to go out into the world and shoot with something so basic that almost the only option is to decide on where to point the thing, and even that can be a challenge. A liberating act, a cry of freedom from the tyranny of perfect exposure and razor sharpness.

And once in a while, when the stars converge and the moon is in the seventh house and Jupiter aligns with Mars, some photons in the form of an image which is both good as a composition and technically pleasing will dance upon those silver halides, without being totaled by a random light leak. Magic will happen. I can almost understand why toy cameras are so compelling to some, because when they hit, they really hit, and they’re the absolute antithesis of the pixel-peeping, moar-megapixels, give-me-sharpness-or-give-me-death attitudes so prevalent in photography (particularly of the digital sort) today.

Anyway I took out my old Ansco Goodwin #2 box camera for a spin one morning, to see if I could make something for the FADU “disposable camera” shoot out and APUG’s Jan/Feb challenge. We’ll neatly sidestep the fact that of the 8 frames I shot, 3 were essentially unexposed, 3 more were so badly composed that they might as well have been blank, and only 2 had promise, with one in particular standing out. Such is the way of it when you make photos with toys. I’m grateful I got one really nice one out of the deal, and I had a bit of fun in the process which is never a bad thing. 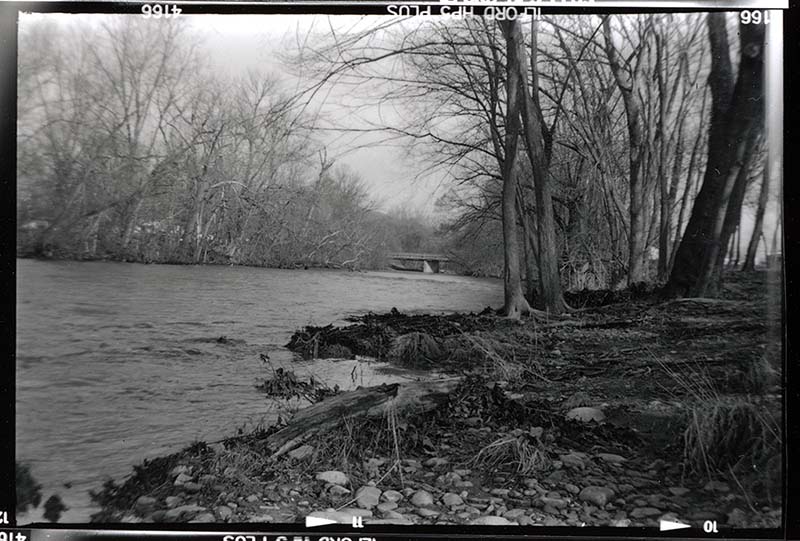 The film was developed in Ansco 130 (yes, my print developer!) at 1 + 43 dilution (compared to normal 1 + 1 for prints), semi stand for 30 minutes with a single inversion at the 10 and 20 minute intervals; this is a topic for a future post but is proving to be a method worth pursuing. This is a scan from the contact sheet, showing the full 6×9 frame with overscan. I plan on making an enlarged print from this negative, cropped in a little and with the horizon leveled.