And now for something completely different… Redscale is a film photography technique whereby color negative film is exposed through the film base. The film is flipped back to front and exposed a couple of stops slower than the box speed, so if you have ISO 400 film, you would meter at ISO 100. It is then scanned or printed normally for the film type. 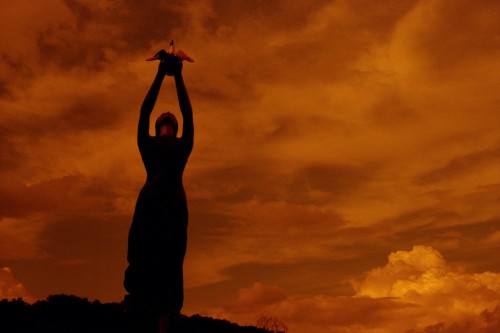 As you can see the effect is dramatic: no blue tones register at all, white highlights go to bright yellow or orange and darker tones render through various shades of reddish-orange and on to black. Contrast is quite high. The effect varies depending on the exposure and type of film used, and happens because of the way the filtration and sensitized emulsion layers are organized. This shot was underexposed slightly, maybe a stop or so, probably because I didn’t correctly adjust for shooting a mostly sky composition with a 1970’s era center weighted meter.

You can buy pre-made redscale; Lomography and Rollei both produce it, but in my case I used a bulk loader, a roll of Kodak Ultra Max 400 from my local Kroger and a used cartridge which had black and white film. When developing the black and white, I’d cut the film off leaving a short tail hanging out of the cartridge. I loaded this into the bulk loader, inserted my roll of C41 film where the bulk reel would normally go in the loader, cut the end off to leave a straight edge and taped it to the tongue sticking out of the old black and white cartridge. Closed up the loader and wound on until I hit the end of the roll. Opened up the loader, cut off the film close to the original color cartridge I’d just wound the film off, and cut a tongue into what was now the film leader.

I figured about 20 usable frames, allowing for losing frames on each end of the roll and keeping the taped join inside the cartridge. Development was normal C41 at my usual pro photo lab, after explaining what I’d done they took this weirdness in their stride and developed it without any problem; I can only imagine the trouble I might have encountered at a drugstore 1 hour photo place…

The resulting negatives were scanned using my preset for the film type I used, yielding these very dramatic, pleasing tones.

I haven’t tried any more since. Only this one shot from the entire roll was a “keeper” and I wasn’t really happy with the sharpness of focus on any of them (it wasn’t too critical for this shot, but I wouldn’t want to make a very large print from this). Besides, my concentration is very much on black and white now. But it was a fun little experiment and I may give it another try sometime.